"SHEG" THE HOT NAIJA GUY ON OPRAH'S BIG GIVE!! 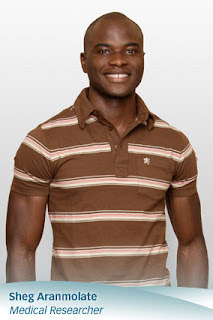 Okay unless you have been living under a rock or you have been too preoccupied with things going on in your life, you have probably heard of OPRAH'S NEW SHOW called OPRAHS BIG GIVE. Well here is how it works out on the show:
First things first, you have to raise money to support someone in need within five days. Be it to pay of their student loan totaling $206000, or to pay off the mortgage of a widowed young lady. Segun "Sheg" for short, partnered with another lady for his first task and they came up with a not so hot fashion show to raise money for the medical student whose loans totaled 206000 dollars! yes you heard empower local surgeons to want to give back," Sheg says. In addition, he says the foundation hopes to expand into other countries around the world.

Sheg and his wife have a two-year-old daughter, Nilaja, which means "joyful one."
"I wanted to show the new generation—the MySpace and YouTube people—that it's hip to empower people," Sheg says. "We are getting to the point that people have become so secluded. We've become so distracted, but it's our duty as human beings to make a difference."
Sheg's Favorite…Giving Back Moment: When I was in Kindergarten, I would go into the cafeteria and get all of the drinks for my classmates. It's my first memory of giving back. They were so excited when they saw me coming in with the basket!

Time of Day: Night. I get to reflect on my day.

Vacation: Hanging out with my sisters in London

Memory: The birth of my daughter

Weekend Activity: I just finished writing a book. I write mostly on the weekends. My book is about very simple reasons to be inspired and make a difference.'

Not bad right readers, hey Sheg quick question did daddy know you were buying drinks in Kindergarten. Hope to see more of you in this race for the ultimate prize; at least, should you win, you would not have any student loans, Home mortgage, or anything like that, right readers?
abestos data recovery inspirational mortgage student loan