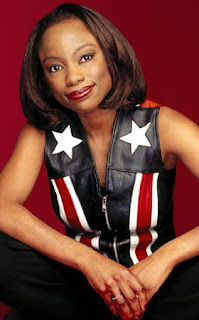 According to CNN
"Her career began when she was 14 years old, as a junior reporter for the UK's first talk radio station LBC. Oke joined the British Broadcasting Corporation as a radio reporter after graduating from University. She received her bachelors degree in English literature and language from Birmingham University in England. Oke is British by birth and Nigerian by parentage."

You can view the video via this link http://www.cnn.com/video/?/video/world/2008/03/21/oke.africa.payphone.shortage.cnn