THIS JUST IN!!!NUN BIRTHS BABY VIA IMMACULATE CONCEPTION!! WHAT DOES THIS MEAN FOR THE WORLD??

on January 18, 2014
Is this a mystery could God be trying  to tell us something 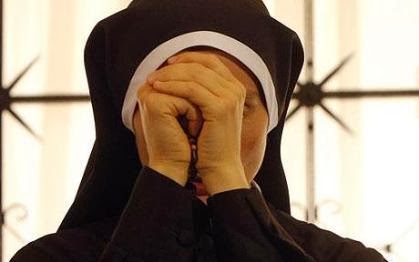 Well according to  vanguard
ROME (AFP) – A Salvadorean nun who said she had no idea she was pregnant gave birth in Italy this week after she felt stomach cramps in her convent and was rushed to hospital, Italian media reported on Friday.
The 31-year-old mother and her baby boy, who weighs 3.5 kilogrammes (nine pounds), are doing well and other new mothers in Rieti hospital have begun collecting clothes and donations for her, the reports said.
“I did not know I was pregnant. I only felt a stomach pain,” the nun was quoted as saying at the hospital, the Italian news agency ANSA reported.
La Repubblica said she gave birth on Wednesday.
ANSA said the nun had named her baby Francesco (Francis) — also the pope’s chosen title and one of the most popular names in Italy, where St Francis of Assisi is the much-loved national patron saint.
The hospital could not be reached for comment.
The nun belongs to the “Little Disciples of Jesus” convent in Campomoro near Rieti, which manages an old people’s home and reports said she would keep the baby.
Her fellow nuns were quoted saying they were “very surprised”.

THE KEY WORD BEING SUPRISED!! BET THEY WERE!!
NUN GIVES BIRTH TO BABY IN ROME PICTURES