SCANDAL!! NATIONAL ENQUIRER IS AT IT AGAIN CLAIMS Nnamdi Asomugha Left A Pregnant Kerry Washington Alone On Her Birthday!!! CLAIMS HE FEELS THREATENED!

on February 15, 2014
Why would they even try to make this up! Not true but here is what they claim

According to National Enquirer, 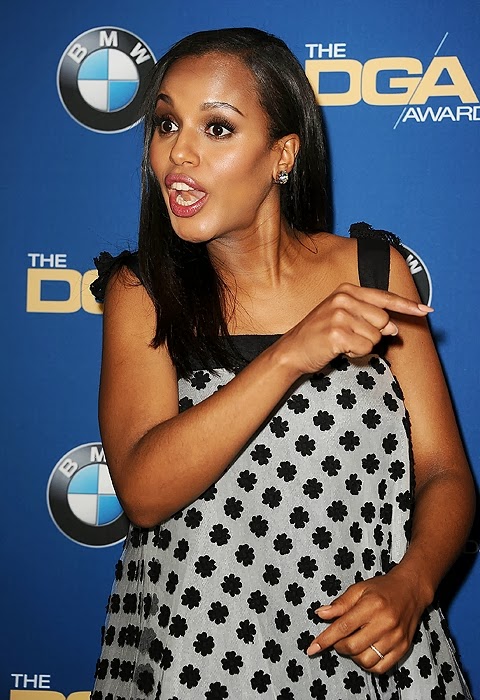 Pregnant newlywed KERRY WASHINGTON’s pro football-player husband left her alone on her 37th birthday to party it up at the Super Bowl – and now a source says their eight-month marriage is teetering on the brink!
Furthermore, a source says Nnamdi Asomugha – who was dropped by the San Francisco 49ers – is beginning to feel over*whelmed by Kerry’s success. “It’s an extremely difficult time for Kerry right now,” an insider told The ENQUIRER.
“She was incredibly embarrassed when Nnamdi flew off to New York for the Super Bowl instead of sharing a romantic night to celebrate her birthday. “She’s fears that he’s proving to be an unreliable husband, and she’s even more concerned about what kind of father he’ll make.”

Kerry, who plays political “fixer” Olivia Pope on her ABC hit, married Nnamdi, 32, in a secret Idaho wedding last summer. But as The ENQUIRER reported, trouble soon began.
Nnamdi lost his job at the same time his wife was pulling in $80,000 an episode, making her one of TV’s highest paid actresses. The beauty, who is worth an estimated $8 million, also runs a fashion consultation business and is a creative consultant for Neutrogena cosmetics.
Her husband felt threatened by her success, and several fights erupted, said the source, adding: “They were definitely growing apart.” Said the source: “What should be the happiest time in Kerry’s life has become a marital minefield.”

First off Mr National Enquirer, we seriously doubt he feels threatened are you kidding us? How do they come up with these hilarious stories??
KERRY WASHINGTON'S HUSBAND ALLEGEDLY LEFT HER ALONE ON HER BIRTHDAY