Chinedu Echeruo founded HOPSTOP, which is the walking equivalent of MAPQUEST. According to local insider "While the site has been designed as a destination site, its information is also being licensed to local companies, such as Real Estate brokerages, who can use it to provide directions to potential buyers. There are currently five customers paying $25,000 each per year for licensing rights, including Coldwell Banker and Corcoran (a New York Real Estate powerhouse)." Chinedu won the innovator of the year award from Black enterpise. Supposedly revenue from the site is over 3.2 million dollars this year. Kudos to Chinedu! 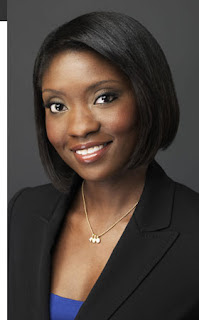 
Ogunnaike has been covering entertainment news since 1999. Prior to joining CNN, Ogunnaike was the top culture reporter for The New York Times and spearheaded its entertainment coverage, writing profiles of celebrities like Jennifer Lopez, Oprah Winfrey and Sting for the paper's "Arts and Leisure" section.


Before that, she was a features reporter at the New York Daily News, where she covered breaking news on celebrities and entertainment for "NOW," the paper's entertainment section, and for the Rush and Molloy column. Previously, Ogunnaike was a contributing writer for Vibe magazine, where she was responsible for monthly music features and cover stories. She has also had her work published in Rolling Stone, New York, Glamour, Details, Nylon, the New York Observer and V Magazine."

Nosa Omogui is the founder and chairman of NERVANA. According to NERVANA "Nervana is dedicated to the innovation of leading knowledge discovery technologies that enable knowledge based workers to more efficiently find, correlate and retrieve the information from vast repositories both inside and outside their enterprise. The industry leading Nervana Discovery Solution is an intelligent knowledge discovery technology that understands and efficiently translates the true semantic meaning of the inquiry, enabling direct access to meaningful data. "

According to the seattle times "Omoigui has created a way for researchers to efficiently search through Medline, a massive, government-owned database of documents related to health sciences and medicine. His search engine is so precise, he said, that it can answer such narrow requests as "What is the impact of cell death on lymphatic cancer?"
Kudos to him.

Free 411 is a must today. 411sms makes that possible. This hot startup was founded by Uyi. The site also makes finding hotspots possible.

According to the number 1 blog on the web ENGADGET "While we all wait around for WiMax, we're stuck searching for WiFi hotspots in order to get our Net on. Sure, war-chalking is one low-tech solution, but 411sms has just made the task a little easier, allowing cellphone users to text "wifi: my location" to their SMS servers, and receive a list of local hotspots in response. Users with certain GPS-enabled phones don't even need to enter their location, as 411sms's servers will pull that data automatically"

More to come what do you say?

Omodudu said…
Why is it that u have not yet profiled me. I will take offense to this.. LOL good job.
11:06 AM

Anonymous said…
You are right Naija gal, the 411 sms is the best thing that has happened to sms texting. once you use it, you will never use 411 ever again.
8:10 PM

Viaduct said…
You can not imagine how many touches you have just lighted by putting up that list, I have a cousin in college and she would be happy to know that a Nigerian works for CNN. Thanks
2:24 PM

Anonymous said…
Sorry, never heard of any of those people b4.
8:08 AM