Skip to main content
on March 24, 2012
Africa super rich profiled in the Guardian . did you know about the millionaires playground boat ride away from Lagos? Well there is one did you know that Porsche has a base in Nigeria now? Well you will soon once you read the article below which was originally posted in the Guardian UK . we just had to bring it to you , so go ahead and read it and let us know what you think. thisn 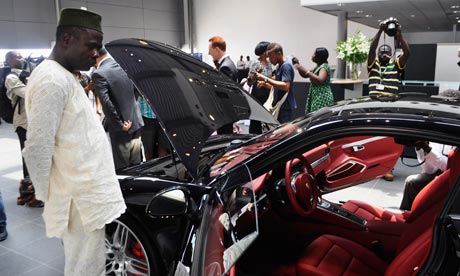 Still, luxury brand retailers are likely to flourish in a country where wealth is traditionally seen as a benefit to the community. "If we didn't have such terrible leaders only concerned with buying themselves things, everyone in Africa would be rich enough to buy designer clothes for themselves and all their friends," said Christina Akinjola, an unemployed secretary, as she stocked up on fake Chanel bags in the car park of a Lagos mall.