One painful truth we discovered from Barcelona beating Arsenal!! 3-1!

on March 17, 2016
Barcelona moved on to quarter-finals of the Champions League thanks to beating Arsenal in their last 16 encounter. 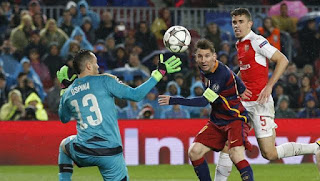 Arsenal  needs to step up its game in Europe. After the scored an early goal they actually played amazingly well. Barcelona then had to change its tatics and make some desperate blocks and soul searching tackles. But it was not to be just as it was in AC Milan 2012, Bayern 2013 and Monaco 2015,
You have to play a solid game to win! Period!
Well lets see what the next round holds!