Omg this has to be the Most Unbelievably Crazy Article which asks is Lagos the most Dangerous City in world?? Wait there is more....

on March 28, 2016
Omg this has to be the Most Unbelievably Crazy Article which asks is Lagos the most Dangerous City in world?? 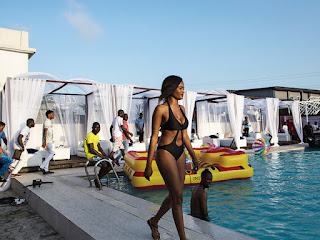 What do you have to say?

This article from playboy's Adam is mad crazy cool? He says:


Every privileged soul I met in Lagos had at least one story about staring down the barrel of a gun or the edge of a knife (the poor and working class are mugged and robbed just as often), and there were few better targets than the players heading to Industry Night at Sip Lounge. Lagos is a city of approximately 20 million people where some 9,000 millionaires float upon a sprawling mass of ajepakos (Yoruba slang that roughly translates as “twig eaters”).

Bizzle, born Abiodun Osikoya, is the 30-year-old A&R manager for Mavin Records, and like so many successful Lagosians, he was born rich. When he was in high school, a wave of “returnees”—children of the Nigerian diaspora educated overseas and tired of bashing their heads against the European and American glass ceilings—came home in search of real opportunity and a chance to shake off the anxiety of racism.
As far as many of the returnees were concerned, the old stories of Africa—the ones about war, poverty and corruption—were outdated. It was a new Africa now. Mobile-phone technology wired the continent, investment and entrepreneurship were flourishing, and Nigeria, with its oil wealth and energetic population—a significant portion of which was under 35—was poised for unprecedented growth. Lagos even had a new sound.

Okay now for the biggie!!


While the Island features steel-and-glass skyscrapers, posh boutiques, ample space and wide, paved roads, mainland ghettos are jumbles of tin-roofed cinder-block walk-ups and spiderweb electric lines sagging over often unpaved roads running parallel to open sewers. Unemployment is rampant, health services are woeful and emergency services are nonexistent. If someone collapses from heart failure or a robbery is in progress, Lagosians have no reliable number to call. People die every day from treatable illnesses and kids learn early that life on the mainland is cheap, which is why most grow up dreaming of one day making it to the Island to claim a piece of the good life.


Sounds about right this has to be fixed!


Credit is extraordinarily difficult to obtain, and even my own credit cards were cut off after one or two charges in Lagos. As a result, the city runs on cash, which makes it almost impossible to transcend poverty. That’s why you see Lagosians of all ages selling anything and everything they can find at roadside intersections and even on the expressways when traffic grinds to a halt.

Okay now for what we always knew Lagosians do not feel danger!  What do you have to say?