Ouch!!! Looks like Vico is not happy about his headies snub! posts massive rant on instagram!!#headies 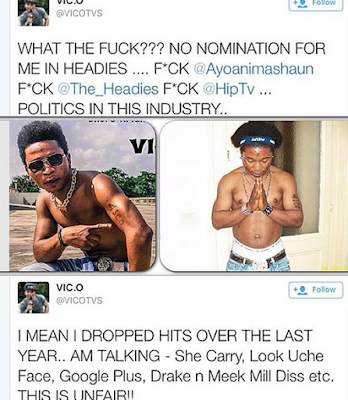 Vico went crazy on an f word rant towards the Headies Awards. After being snubbed by the award organizers, the self-acclaimed best rapper in Nigeria went on a Twitter rant claiming politics cost him the nomination by  the organizers. tHonestly, he did have just as  successful a year like Olamide  who had d highest number of nominations...(shh sorry to say but we love Olamide! where is Linda here? Shakiti bobo ) anyways Vico cool down here is your video on Naijagal!! arrgh now where can I get my screen scrubber, too many bloody f words