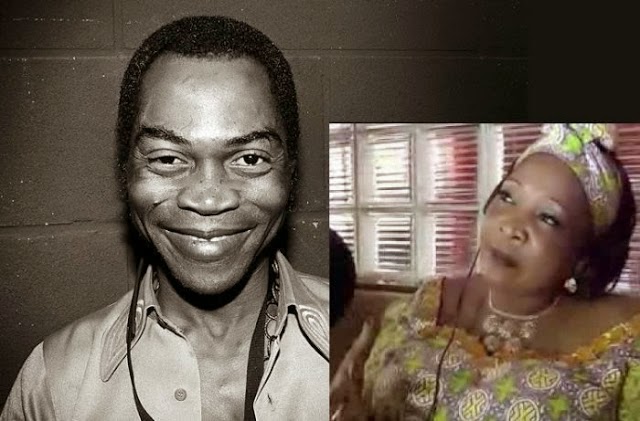 On how she met Fela, she claims she met him at 16 at a Sunday Jump in 1974 .She started dating him right after an incident where one of his boys harassed her friend. She dropped  out of school to spend time with FELA even refusing her father's call to return home!


"When Kalakuta Republic was invaded and we all had different injuries, mine was on my navel, and all the other women making jest of me that I would never have a baby, even though I was just about 20 years old then. I really wanted to have children because of the special treatment Fela gave his children. I then decided to look outside because Fela didn’t want to have any more children then. He went to one Baba JK in Idi Oro in Mushin to make his sperm watery. He was always drinking African medicine there, and that was what neutralized his sperm. So many women were always getting pregnant for him that he was terminating about six different pregnancies per day. It was Dr. Beko Ransome-Kuti that used to terminate it then. They’re all dead now; me too, I’m going to die one day, but it’s always good to put things right for the records. I had my baby for a journalist, Steve, with Punch Newspapers. This is a true life story. I want you to bring it out and let people know.
"After that time, Fela now called Steve and the press that ‘these women have suffered a lot with me, so if anyone of them wants, they can marry me and be having children.’ Steve said if that was what he wanted, then, no problem. So Fela put out a notebook and said that the people who want to marry him out of all the women in the shrine should put their names down. In all, we were 27 that wrote our names. On the day of the wedding ceremony, Fela’s best pal, Tunji Braithwaite, who was supposed to join us together, ran away from his chambers, saying that he had never seen such a thing before for a man to marry 27 women at the same time. The following day, Fela called an Ifa priest and they came to join us together at Hotel Parisona in Anthony, Lagos. Fela put money on everybody’s heads and we collected our certificates of marriage to him"
HMM with all that we just had to show you this video of FELA in 1974!