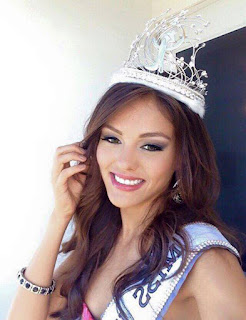 Miss Puerto Rico Universe 2016, Kristhielee Caride, lost her crown this afternoon, according to Univision. The director of Miss Puerto Rico Universe, Desirée Lowry, announced the decision this afternoon in a press conference. "I saw the damage that she was doing and the damage that she was doing to the organization," said Lowry as she announced the news. The decision to replace Kristhielee stemmed from the beauty queen not wanting to participate in interviews.

She even told the reporter a Elnuevodia.com that she didn't like cameras. The organization has announced that its new Miss Puerto Rico Universe 2016 is Brenda Jiménez. PHOTOS: 2015 Miss Universe Swimsuit Photos Jiménez, who is a biology and sociology student, was the first finalist and represented Aguadilla in the contest. "I am really excited and extremely anxious. I haven't processed it yet," said the new Miss Universe. Speaking of controversies around the pagent...see Miss Universe Pia Alonzo Wurtzbach's reaction to winning the pageant in the clip below.


Ouch!!! So you do not like cameras right? Why would you go on a pageant that prides itself on showing off the winners via photographs and more??? That is the billion dollar question right there!!!