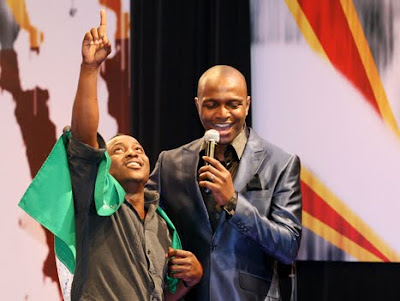 A known favorite from this season's episode of big brother Africa hosted by MNET won the $200000 prize! His name is Kelvin, Check out his bio: Age 27
Country Nigeria
Hometown Jos
Occupation Entertainer
Biography 27- year- old entertainer Kevin has a BA in English Language and has 7 siblings. He’s proud to be Nigerian because Nigerians stand out and survive any situation – “which is why you’ll find a Nigerian almost anywhere. ” A Manchester United fan whose hobbies include rapping, Kevin would like travel to Hollywood to see a movie in the making there. If he wins Big Brother Revolution, Kevin will spend his money on creating an entertainment empire and will share some of it with friends and family who have stood by him.

Well, he was certainly a fan favorite, mine too! Thanks in part to my sweet mom! What do you say readers? Are you as excited as I am about the win? What in the world is he going to do with $200000! What would you do with $200000; comment away, we want to know
big brother africa Big Brother Africa Revolution KELVIN WINS BIG BRTOHER AFRICA Kevin Chuwang Pam

etims said…
Kelvin!! U were right to say God helped you pull through!! Im so very much proud of you even though am not from Naija!! I always thought you or Itai would win; anyway and I screamed when u did!! Keep the fire burning man!!!
9:00 AM

NWABUEZE CHUKWU said…
I watched biggy for 91 days and it was really interesting. Kevin stood out. I had tipped him the winner all along. When he was announced on suday,I cried more than Kevin. My friends could not belive their eyes. I did because of the lesson it poured into my mind: you can always win when you stand and showcase your passion for you real talent. Kevin won because he has passion for entertainment and biggy is about the show for who you are. Entermainment is what Kevin has given his all. NWABUEZE CHUKWU
4:07 PM

Anonymous said…
I WENT ON FACEBOOK AND ALL TO GET VOTES FOR HIM.AND MY WHOLE FAMILY KNOWS THAT I LOVE THIS GUY.HE IS MAN.I STOOD FOR HIM ALL THROUGH.CONGRATS.I GOT CALLS FROM LONDON AND ALL THAT HAS HE WON..WHEN I LATER TOLD PEOPLE I NEVER KNEW HIM..THEY LAUGHED.abayomi animashaun
11:01 AM