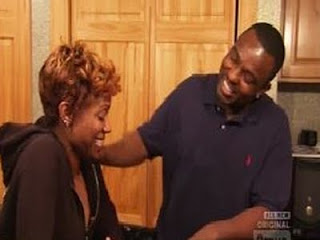 The ex-fiance of Kandi Burruss star on "Real Housewives of Atlanta" passed away tonight after a brawl erupted at a club in Atlanta.

According to MYFOXATLANTA "A.J. Jewell suffered severe head injuries during the fight at Body Tap and was rushed to Piedmont Hospital, where he later died"

Tairebabs said…
awwww... this is really sad. I watched a couple of episodes were AJ and Kandi's mum were not getting along. I didn't know the engagement was off though. I'm stale. May his soul rest in peace.
7:36 AM

Unknown said…
My prays and heart goes out to all to AJ children too include Kandi's daughter. And for Kandi I pray she can find peace and understanding.
11:42 PM

Anonymous said…
Iam so sorry to hear that kandi's fiance had died. that hurts me cause iam kind of going through the same thing that they went through cause my child father is older than me and he haves a lot of kids, my son make his ninth child and mom dont like him. My heart gose out to kindi frist than his and her family.{keep your head up mama.}
10:07 PM

Anonymous said…
I think Khandi is the most beautiful woman on real housewives of atlanta i wonder how he got in the fight i really i am to hear that these has happen i will prey for your famliy
12:06 PM

Anonymous said…
peace love and happiness to Kandi....may the lord help you get threw this time of dispare...thoughts and prayers to you and his family.

P.S. never never never, let your mother stop you from Love. When people get old they don't understand today's way of life. yes I am a psych major
10:33 AM

Anonymous said…
I am sorry about your loss Kandi although to be honest I never saw any really Love except on your part he was not a touchy feeley kind of person even after you song, did your play. of the play with Nene he never came up to you and said hey good job a kiss on the check maybe flowers such as Lisa husband did it seemed as if the fire was gone before it started and that your Mom knew what she was talking about he acted more getto and like a thug more than anything else Im sorry to say I just call it like I see it good luck in your life ahead of you for your daughter and yourself..

credit repair said…
Bankruptcy is usually a hectic time, sometimes it is even quite emotional, consumers are not thinking straight. They just know they want it over with as quickly as possible, so they go out hire a lawyer and listen to what they tell them to do....
3:27 PM